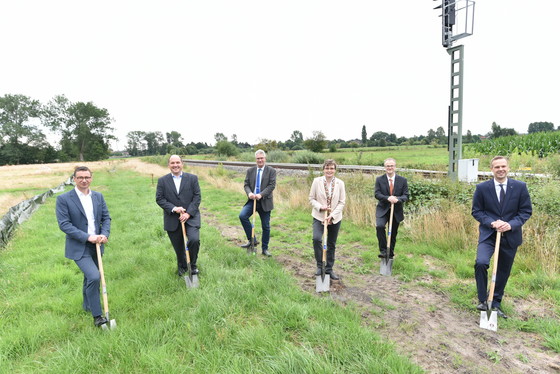 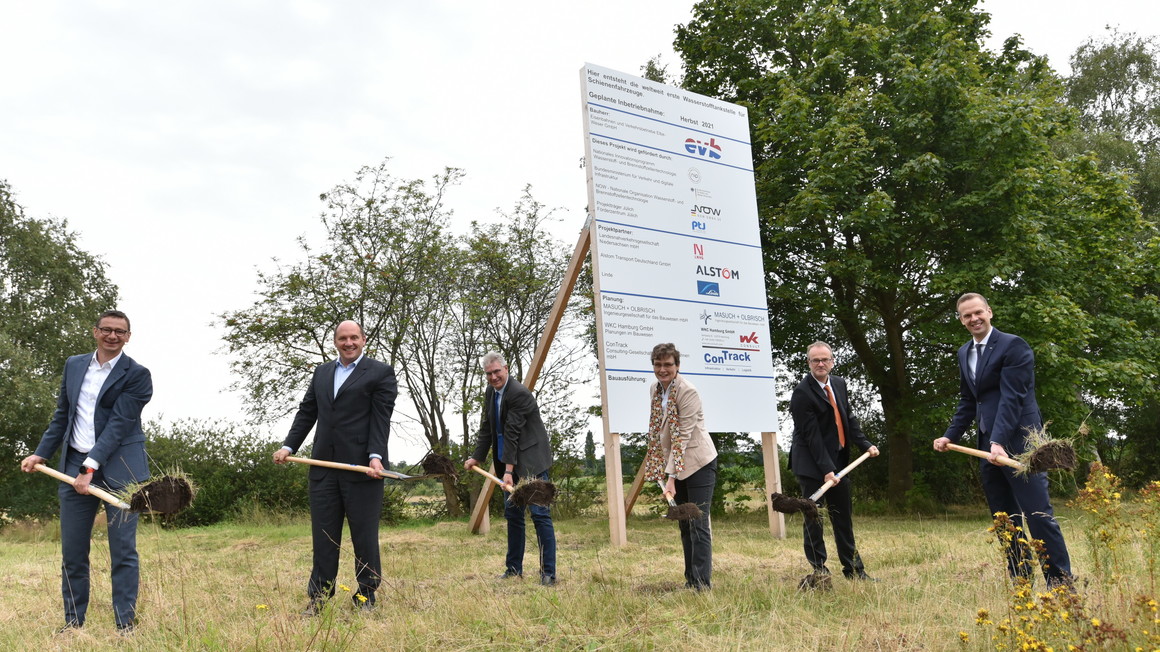 Bremervoerde, 28 July 2020 – In Lower Saxony's Bremervoerde, the world's first hydrogen filling station for passenger trains will be built starting in September. Representatives of the state and the companies involved met on site for a symbolic ground-breaking ceremony. An eighteen-month test phase for the first two trains was successfully completed at the end of February. The mobility project, which has attracted worldwide attention, is now entering its next phase.

The gases and engineering company Linde will build and operate the hydrogen filling station near Bremervoerde station on behalf of the Lower Saxony Regional Transport Company (LNVG). Other project partners are the rail vehicle manufacturer Alstom, the state of Lower Saxony and the Elbe-Weser Railways and Transport Company (EVB).

After completion expected in mid-2021, the hydrogen filling station will replace the existing mobile filling solution. With a capacity of around 1,600 kg of hydrogen per day, it is nominally one of the largest hydrogen filling stations in the world. From the beginning of 2022, 14 hydrogen-powered regional trains supplied by Alstom will be refuelled there daily and around the clock if necessary. Thanks to a range of 1,000 kilometers, the multiple-unit trains will be able to run emission-free all day long on the EVB network with just one tank filling. Expansion areas at the filling station will allow hydrogen to be produced on site later using electrolysis and regenerative electricity.

"The ground-breaking ceremony for this world's first hydrogen filling station for passenger trains is an important step for a showcase project from Lower Saxony", said Carmen Schwabl, Managing Director of LNVG. The initiative to test the gas as a fuel in local rail passenger transport came from LNVG.

"We are delighted to play a key role in this world-leading, innovative project," said Mathias Kranz, responsible at Linde for the onsite and bulk business in Germany. "Linde has long been committed to hydrogen, which can make a significant contribution to decarbonisation. The introduction of hydrogen as a fuel for trains will significantly reduce the burden on the environment, as one kilogram of hydrogen replaces approximately 4.5 litres of diesel fuel".

"The construction of the hydrogen filling station in Bremervörde will create the basis for the series operation of our emission-free hydrogen trains in the Weser-Elbe network. We really appreciate that Linde, as an experienced hydrogen supplier, is now also taking over the refuelling of the series trains following the successful trial operation," comments Jörg Nikutta, Managing Director Germany and Austria of Alstom.

"We are proud that we were the first railway company in the world with permission to operate fuel cell trains on the Weser-Elbe network. Our passengers were very curious about the trains and their technology from the very beginning. In addition to the very low noise level, the hydrogen train impresses with its zero emissions, especially in times of climate change. For our train drivers, the operation of iLint was a very special motivation", said Andreas Wagner, head of the SPNV division and authorized signatory of the Eisenbahnen und Verkehrsbetriebe Elbe-Weser GmbH (evb).

The project is subsidized by the national innovation programme for hydrogen and fuel cell technology of the Federal Ministry of Transport, and Digital Infrastructure NOW GmbH will coordinate the funding guideline and Project Management Jülich (PtJ) is responsible for the implementation.

About the Coradia iLint

Coradia iLint is the first passenger train in the world to be powered by a hydrogen fuel cell, which generates electrical energy for propulsion. This completely emission-free train is quiet and emits only water vapor and condensation water. The train features several different innovations: clean energy conversion, flexible energy storage in batteries and intelligent management of motive power and available energy. Designed specifically for use on non-electrified lines, it enables clean, sustainable train operations.

Linde is a leading global industrial gases and engineering company with 2019 sales of $28 billion (€25 billion). We live our mission of making our world more productive every day by providing high-quality solutions, technologies and services which are making our customers more successful and helping to sustain and protect our planet.
The company serves a variety of end markets including chemicals & refining, food & beverage, electronics, healthcare, manufacturing and primary metals. Linde’s industrial gases are used in countless applications, from life-saving oxygen for hospitals to high-purity & specialty gases for electronics manufacturing, hydrogen for clean fuels and much more. Linde also delivers state-of-the-art gas processing solutions to support customer expansion, efficiency improvements and emissions reductions.

About the Elbe-Weser GmbH (evb)

The evb-group is one of the leading groups of companies in passenger and freight traffic in Northern Germany. With over 550 committed employees evb transports annually 2 million passengers on the rail and 4 million passengers in the buses in the Elbe-Weser-Triangle safely to their destination. evb has its own route network, bus and train repair workshops and travel agencies. The evb group operates the freight traffic throughout Germany and is represented with locations in Hamburg, Bremen, Bremerhaven and Regensburg, among others. As a shareholder evb is involved in metronom as well as in various logistics companies and transport associations in the region.

About the Landesnahverkehrsgesellschaft Niedersachsen mbH

The Landesnahverkehrsgesellschaft Niedersachsen mbH organises the local rail passenger transport (SPNV) between the North Sea and the Harz Mountains and makes annual compensation payments of around 300 million euros to the railway companies. With its entry into fuel cell technology, LNVG is playing a pioneering role in Germany.