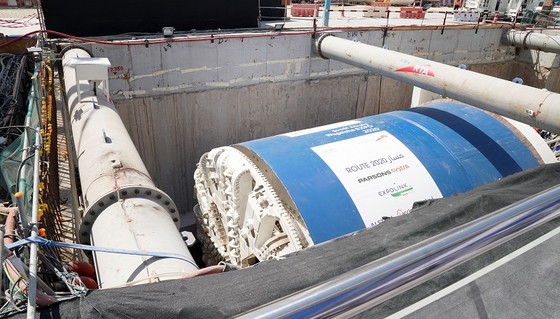 Perforation has begun on the Route 2020 Project (Dubai Metro Red Line extension). ACCIONA and Gulermak, in charge of the civil works for ExpoLink consortium have started the perforation using TBM named Wugeisha EXPO 2020.

HH Sheikh Mohammed bin Rashid Al Maktoum, Vice-President and Prime Minister of the UAE and Ruler of Dubai,  launched the tunnel drilling works of the Route 2020 Project on 24 October 2017, which extends the Dubai Metro Red Line 15 km from Nakheel Harbour and Tower Station to the Expo 2020 site. The tunnel starts from Discovery Gardens area and stretches 3.2 km up to The Green Community area It features depths ranging from 12.5 to 36 metres.

ExpoLink Consortium, led by Frances Alstom includes Spains ACCIONA and Turkeys Gulermak JV, signed the contract to design and extend the Dubai Metros Red Line and modernize its existing systems, with the Dubai Roads & Transport Authority (RTA) in 2016. The project, called Route 2020, is worth a total of 2.6 (10.6 AED) billion. ACCIONA and Gulermak JV are leading the civil engineering works, which accounts for approximately 50% of the project, while Alstom is carrying out the other half, which includes supplying 50 Metropolis trains and integrating the Metro Systems, and upgrading the existing metro line.

His Highness also inspected the new interior design of the Dubai Metro carriages during the TBM launch event on 24 October 2017. The new additions to the metro  are being manufactured under a contract for the supply of 50 trains; 15 for serving Expo 2020 and 35 for upgrading the service of the Dubai Metro.

His Highness inspected the new additions and improvements to the interior design of the metro cars such as dedicating the last car for women and children and leaving part of the first car for the Gold Class and other cars for Silver Class. Seats will be transversal in the Gold Class, and longitudinal in the Silver Class as well as the Women & Children car. The exterior design of trains will remain as it is, in order to maintain the design identity of the Dubai Metro and its familiar colors to public.

Wugeisha EXPO 2020 can crush stones and penetrate through sandy layers or any soil components that might be encountered during the drilling process. It has a huge metal gear supported by an automated tail, and carries in its front a cutting wheel with a cavity, the shape of which varies according to the type of drilling, soil layers and type.

At the back of the cavity, there are hydraulic levers that support the propulsion of the drilling. It is also fitted with a machine for removing the soil, tubes for discharging the mud, and a control room in addition to other hi-tech components with high features to accelerate the drilling process.

The total length of Wugeisha EXPO 2020 is 103 meters. It is also an environmental-friendly machine that has no negative impact on land layers surrounding the drilling area. Moreover, the tunnels produced by the machine will have symmetrical dimensions, which makes it easy to complete other construction works and reduce tunnel wall installation expenses.