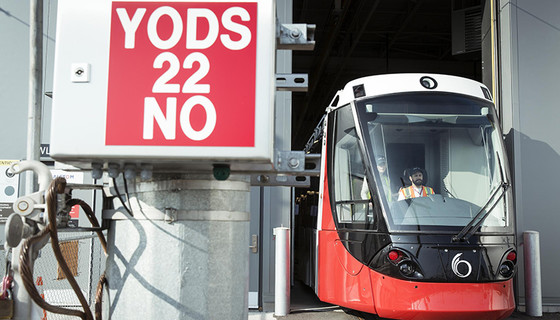 Alstom has been awarded a contract worth close to 200 million (approximately CA$300 million) by Rideau Transit Group (RTG) [1] to supply 38 Citadis Spirit light rail vehicles for the Stage 2 O-Train Light Rail Transit Expansion Project in Ottawa, Ontario. The expansion will extend the Confederation Line currently being built further east by more than 12 km, and further west by another 15 km. Construction of Stage 2 will begin in 2019 and, once complete in 2023, the total LRT system will have nearly 60 km of rail and 41 stations, with more than 70% of residents in Ottawa living within five kilometres of the line.

We are excited that RTG has selected Alstom to supply the Citadis Spirit for the Stage 2 extension of Ottawas light rail system, said Angelo Guercioni, Managing Director of Alstom Canada. This second order for Ottawa builds upon our track record, where close to half of the 34 Citadis Spirit vehicles for the Confederation Line are in various stages of assembly and testing.

The Citadis Spirit is a 100% low-floor vehicle that offers easy accessibility, and an interior layout featuring a wide central aisle and interior circulation that provide a safer and more enjoyable passenger experience. Alstom is currently supplying 34 Citadis Spirit vehicles for Ottawas O-Train Confederation Line as per a 2013 subcontract agreement with RTG, and will maintain both vehicles and the light rail system for a period of 30 years.

Alstom has approximately 120 employees located at the Belfast Yard Maintenance and Storage Facility (MSF) where the Citadis Spirit vehicles are being assembled and tested.  Currently, 9 vehicles are in various stages of assembly and an additional 7 vehicles are undergoing static and dynamic testing. In March 2017, the Citadis Spirit vehicle achieved and surpassed commercial operating speed during dynamic tests on the Confederation Line alignment. The 38 vehicles in the Stage 2 order will also be assembled by Alstom at the Belfast Yard MSF.

The contract announced today follows on a firm order received on 31st May worth approximately 355 million (CA$529 million) from Metrolinx, an agency of the Government of Ontario, for the supply of 61 Citadis Spirit light rail vehicles for the Greater Toronto and Hamilton area (GTHA).

Alstoms Citadis range of light rail vehicles is proven technology with approximately 15 years of return on experience, with more than 2,300 Citadis trains sold to more than 51 cities worldwide.