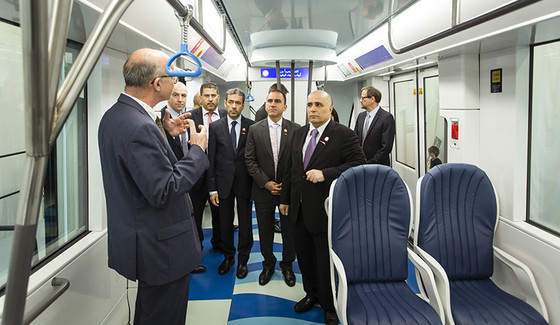 Alstom presented to a delegation of RTA, headed by HE Mattar Al Tayer, Director General & Chairman of the Board of Executive Directors RTA (Roads &Transport Authority), the mock-up of the Metropolis trains for the Route 2020 project [1] in Coignères in Paris.

A full-size mock-up of the Dubai Metro was unveiled to HE Mattar Al Tayer and his accompanying RTA delegation. During this successful visit, the RTA took the opportunity to inspect the aesthetic design and the interiors of the train and validated all comfort aspects.They are the result of the joint development between RTA architectural experts and Alstom one of the members of the ExpoLink Consortium.

The Alstom-led consortium ExpoLink, also composed of ACCIONA and Gulermak, has signed a contract with RTA (Roads & Transport Authority) to design and build the extension of Dubais Red metro line and upgrade the system of the existing line. The total value of the project, also called Route 2020, is 2.6 billion, of which Alstoms share represents half and the civil works, led by ACCIONA including Gulermark represent the other half. The extended line, which will connect the city to the Expo 2020 site, is expected to start commercial service in 2020 for the World Expo [2].

Alstom as a part of ExpoLink consortium - will provide and integrate the whole metro system including 50 Metropolis trainsets, power supply, communication, automatic fare control, track works, platform screen doors and a three-year warranty on the whole system. Additionally, Alstom will enhance the existing metro line by upgrading power supply, signalling systems, miscellaneous communication and track works.   The Metropolis trainsets for Dubai are 88 meters long and composed of five cars per trainset. They will be able to carry up to 700 passengers [3] each. The train offers an excellent level of passenger experience, thanks to wide gangways, large doors and windows, new video broadcast systems and three specific areas for Silver, Family and Gold Classes. Eco-friendly, the train is equipped with a full electrical braking system, smooth LED lighting and other innovations to reduce energy consumption.

[1] The project involves the construction of a 15-kilometre-long line of which 11,8 kilometers of elevated metro line and 3.2 kilometers underground metro line - branching off the existing red line at the Nakheel Harbour & Tower station.

[2] The extension is part of RTAs Route 2020 project, launched in response to an expected increase in ridership and the necessity to link the metro to the World Expo site.