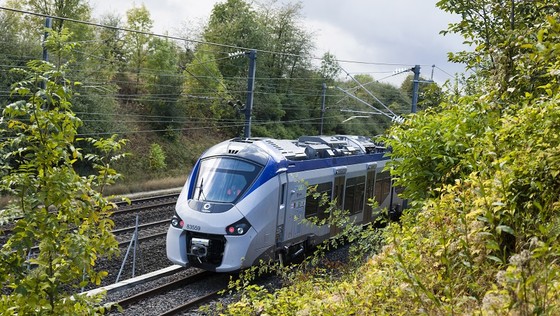 Alstom is to supply 14 additional Coradia Polyvalent trains to the Bourgogne-Franche-Comté and Grand Est regions for an amount of approximately 100 million [1]. These options form part of the Regiolis contract signed in 2009 and follow the 285 trains already ordered by the regions and the French State.

The Bourgogne-Franche-Comté region has ordered 8 Regiolis electric trains consisting of 4 cars each, in addition to the 16 trains of the same type already ordered, 9 of which have already been delivered. The Bourgogne-Franche-Comté regions Regiolis fleet will consist of 24 trains by mid-2020, in line with its objective to promote cleaner mobility, and its strategy to invest in more modern, comfortable and cost-effective trains. The Grand Est region, meanwhile, has decided to purchase 6 new trains, including 5 Coradia Liner trains and one Regiolis dual-mode train consisting of 6 cars. The Grand Est region already has a fleet of 34 Regiolis trains and 19 Coradia Liner trains [2] in commercial service.

"These additional orders are excellent news for the French railway industry and for Alstoms sites in France. They reflect the renewed confidence of the Bourgogne-Franche-Comté and Grand Est regions in Alstom and its solution, Coradia Polyvalent," says Jean-Baptiste Eyméoud, President of Alstom France.

Regiolis and Coradia Liner are part of Alstoms Coradia range of trains, which are available in three lengths (56, 72 and 110 metres) and two types of engines (electric or dual-mode thermal-electric). They can accommodate up to 330 passengers and run at speeds of 160 km/h. They provide increased comfort thanks to seats equipped with individual reading lights and power outlets, spaces dedicated to bicycles and luggage, large bay windows and reduced noise levels. The fully low-floor allows accessibility to all; the Coradia range complies with the STI PRM[3] standard. On-board circulation is more fluid with spacious passenger areas. The reduced weight of the trains, as well as their synchronous permanent magnet motors for traction, combined with articulated architecture, enable a reduction in energy consumption of about 30% compared to the diesel locomotives of the Corail trains. In addition, acquisition, operation and maintenance costs as well as upgrade costs have been taken into account from the design stage to curb expenses incurred during the trains 30-year lifespan.

To date, 299 Coradia Polyvalent trains have been ordered as part of the contract awarded to Alstom by SNCF in October 2009, including 235 trains by 9 French regions and 64 trains by the State, organising authority of the intercity TET trains (trains déquilibre du territoire). More than 40 million kilometres have already been covered by the fleet in commercial service.

The manufacture of Coradia Polyvalent secures more than 4,000 jobs in France at Alstom and its suppliers. Six of Alstom's sites in France design and manufacture the Coradia trains: Reichshoffen for the design and assembly, Ornans for the engines, Le Creusot for the bogies, Tarbes for the traction, Villeurbanne for the onboard electronics and Saint-Ouen for the design.

[1] Booked in Q3 of the current fiscal year

[3] Technical Specifications for Interoperability relating to Persons with Reduced Mobility