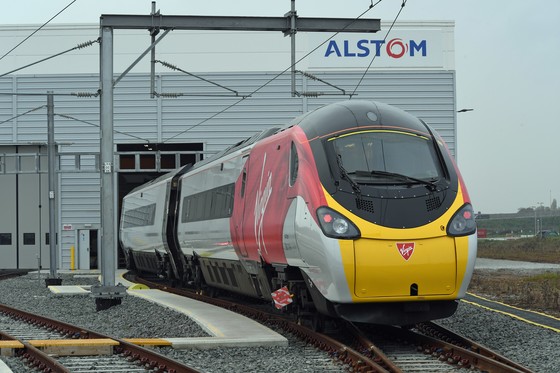 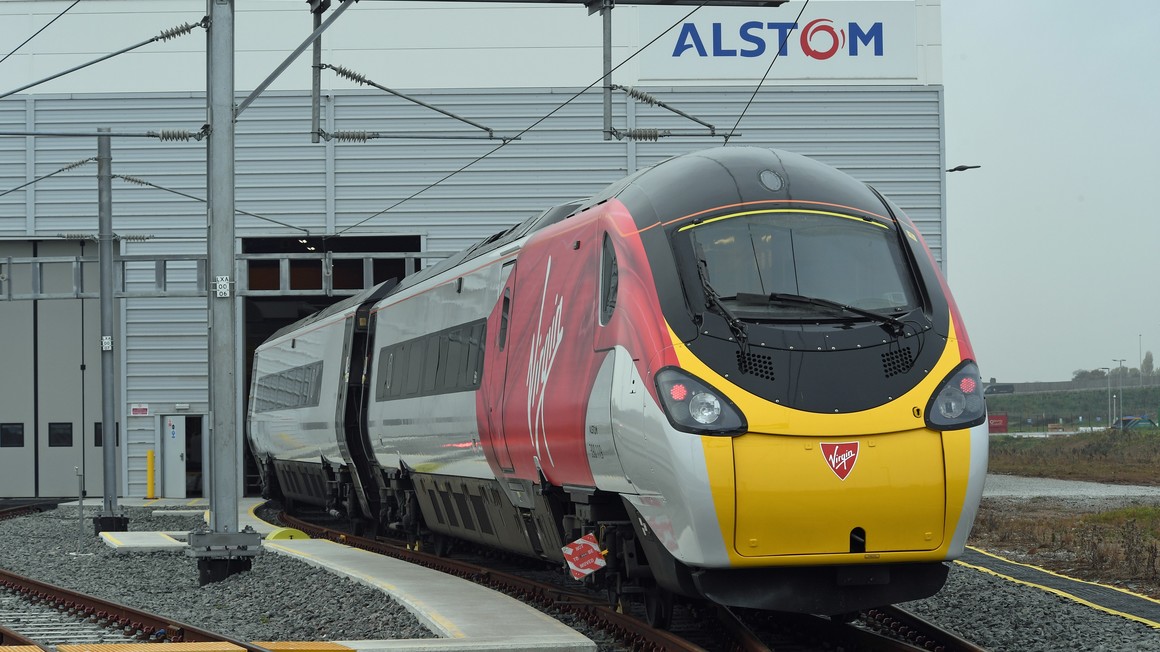 6 November 2018 – Alstom has hit the halfway mark in the huge job of re-painting and overhauling the UK’s fleet of iconic Pendolino trains, as the 28th train rolls out of Alstom’s rail facility in Widnes.  The remainder of the fleet, operated by Virgin Trains and owned by Angel Trains, is due to be completed by December 2019.

The high speed Class 390 Pendolino tilting trains are used by Virgin Trains to provide a fast and frequent service between London, Glasgow, Manchester, Birmingham, Liverpool and points in between. In 2003, Virgin Trains introduced the Alstom built trains and they have reduced journey times on the line and transformed connectivity. Along the 1,265-kilometre route, the last year (2017/18) saw 38.3 million passenger journeys made totalling 7,582.3 million passenger kilometres.[1]

The fleet is receiving a complete re-paint to protect them and ensure they have a successful future on the route. Each train takes two weeks to complete. The work involves stripping back the cars, including exterior fittings, undertaking minor repairs and restoration and comprehensively re-painting, a layer at a time, to prevent corrosion and rust. This protects against wear and tear and will enable the trains to operate as successfully for the second half of their life, as they have done for the first. With advances in paint technology the newly painted trains are finished as well, or better, than when they were first introduced.

The repaint is being completed in Alstom’s Widnes modernisation facility, the most advanced in the country. It was built to be able to accommodate the full length of the 9 and 11 car trains end-to-end and is the only facility in the UK that can do this. The main modernisation hall in Widnes is so large that it rivals the size of the deck of the UK’s flagship new Queen Elizabeth II aircraft carrier.

“We are very proud of the job we’re doing with this repaint. These iconic Pendolinos are the backbone of Britain’s railways, and this will allow them to continue serving the millions of passengers they carry every year. A repaint of this scale has never been undertaken by the industry before and it is particularly special for us as it is the first piece of major work we are doing at our state-of-the-art Widnes facility.

“We are also pleased that this programme has allowed us to bring on some brilliant apprentices, who are now a key part of our team at Widnes. With our partners at Virgin Trains and Angel Trains we want this programme and this iconic train to continue to be a real showcase of what we can achieve in the industry.”

“The new look Pendolino is certainly catching the eye and its of great credit to all involved that will we have a fully repainted fleet by December 2019.”

“We are delighted with the progress of the Pendolino repainting project. We know that this transformative work, led by our partners at Alstom, will both improve the longevity of this Class 390 fleet and benefit British rail passengers for years to come.”

Alstom’s Widnes facility is located right at the heart of the Manchester and Liverpool rail cluster. It includes Alstom’s training academy, delivered in partnership with the National College for High Speed Rail. Eight local apprentices have been taken on as part of the 85 strong workforce for the paint programme and Alstom are also working with the National College of High Speed Rail to offer higher level qualifications to former apprentices and increase skill levels amongst the local workforce.

Widnes is also the home for the technical and engineering talent in Alstom’s Centre of Excellence for Modernisation. It is set to become Alstom’s hydrogen train centre in the UK and it will be the site where Class 321 trains are converted to hydrogen traction under Alstom’s plans with Eversholt rail.