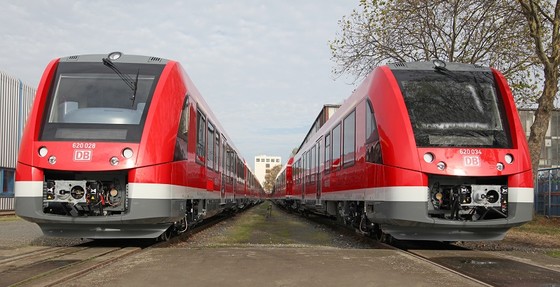 We are very pleased about the confidence once again placed in us regarding our proven Coradia Lint. Starting in 2019, the trains will be operating in Baden-Württemberg and from 2020 in Bavaria, improving railway transport in the regions and bringing passenger comfort to a new level, said Joerg Nikutta, Managing Director of Alstom in Germany & Austria.

The vehicles ordered by DB Regio will operate on the "Dieselnetz Ulm" network along the routes Ulm-Memmingen(-Buxheim), Ulm-Weissenhorn and (Ulm-)-Günzburg-Mindelheim. 15 trains will be delivered in autumn 2020, while the five remaining will follow in autumn 2022. DB Regio has ordered two different types of trains that can easily be coupled for enhanced operational flexibility. Consisting of eight Coradia Lint 41 seating 125 passengers and 12 Coradia Lint 54 seating 150 people, the fleet can be quickly and easily adapted to the volume of passengers and to the different routes.

The five Coradia Lint 54 ordered by HzL for the Bodenseegürtelbahn network in Baden-Württemberg are identical to the fleet ordered by HzL last year for the Ulmer Stern network and will be delivered together with the main fleet in June 2019.

The low-consumption vehicles reach a maximum operating speed of 140 km/h with high acceleration. The two-part trains feature an entry height of around 620mm, a seating capacity of 150 passengers and 18 bicycle parking spaces. They are characterized by a comfortable, spacious seating arrangement in which almost every fixed seat is equipped with a table for laptops. The trains are all equipped with WLAN, an entertainment and passenger information system with static and dynamic information monitors and video surveillance to ensure high passenger safety.

Alstom's Coradia Lint trains have been operating on more than 30 networks in Germany, Europe and Canada since 2000. Thanks to continuous improvements, these trains offer the highest standards in terms of safety, noise and CO2 emissions and are characterized by high availability. More than 2,800 Coradia trains have been sold so far and around 2,300 are currently in service in Denmark, France, Germany, Italy, Luxembourg, the Netherlands, Sweden and Canada.