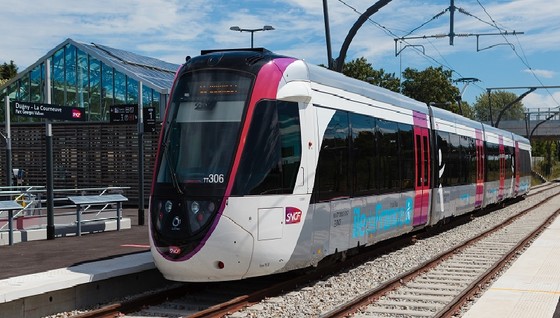 Alstom has received an order to supply 32 additional Citadis Dualis tram-trains to Île-de-France Mobilités and SNCF Transilien. The order is worth approximately 170 million euros, with Île-de-France Mobilités covering 100% of the investment cost of the trains. In total, 22 trains are intended to run on the T12 Express Massy/Evry line and 10 on the T13 Express Saint-Cyr/Saint-Germain line. These options are part of the tram-train frame contract signed by SNCF in 2007 for the French regions, covering the delivery of up to 200 tram-trains.

Designed to meet the increasing need for mobility between urban and suburban networks, Citadis Dualis seamlessly links the centre of town with the suburbs by combining the advantages of the train with those of the tram. Based on the design of Alstom's Citadis tram, the Dualis version retains the trams fundamental characteristics: modularity, accessibility and reliability. Dualis can run on a tramway network just as easily as on the national rail network thanks to certain adaptations in power, safety and comfort levels. This configuration makes it a highly versatile means of transport: it has the same dimensions as a tram, meaning it can circulate in town, while its performance, the same as that of a train, enables it to transport passengers at speeds of almost 100 km/h in outlying areas without the need to change transport modes. Citadis Dualis contributes to sustainable mobility by revitalising urban spaces and enhancing the architectural heritage of cities.

"After the inauguration of the T11 Express tram line in July 2017, and the ongoing deliveries for the T4 tram line, I am delighted to see Alstom continue deploying the tram-train solution in Île-de-France. This additional order points to the relevance of this versatile transport solution, while demonstrating the renewed confidence of our customers, Île-de-France Mobilités and SNCF, says Jean-Baptiste Eyméoud, President of Alstom in France.

To date, 63 Citadis Dualis tram-trains are in circulation in France. A total of 15 other tram-trains have gradually been delivered to Île-de-France since October 2017. These are scheduled for commercial commissioning on the T4 tram line in September 2018, then on its extension on the Clichy-sous-Bois/Montfermeil section at the end of 2019. The deliveries will take place between 2020 and 2022.

Citadis Dualis is designed and assembled in France. Alstoms Valenciennes Petite-Forêt site is in charge of overall project management and the design and development of the trains. Six other sites in France are involved in the manufacturing process: Ornans for the motors, Le Creusot for the bogies, Tarbes for the traction equipment, Villeurbanne for the on-board electronics and passenger information systems, Petit-Quevilly for the transformers, and Saint-Ouen for the design.