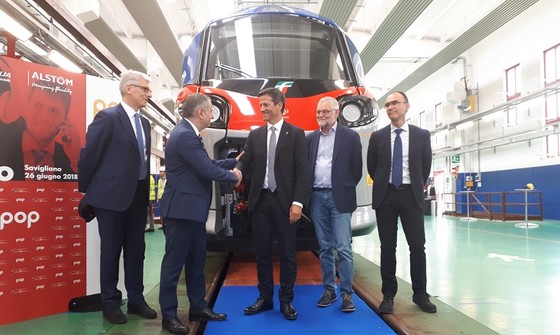 The first example of the Trenitalia Pop train was shown today to the press and to the stakeholders at the Alstom site in Savigliano. In July, the first homologation tests on tracks, necessary to the subsequent admission into service, will start.

The train, designed and manufactured in Italy, in the Alstom sites of Savigliano, Sesto San Giovanni and Bologna, will begin to be delivered by Trenitalia to the regions starting from spring next year and it will be immediately ready to enter commercial service. Of the 150 trains provided on the basis of the Framework Agreement between Alstom and Trenitalia, deliveries to Emilia-Romagna, Puglia, Veneto, Sicily, Piedmont, Liguria, Abruzzo and Marche are already planned.

The first Pop will be in Velim, in the Czech Republic, in the next weeks. There the dynamic technical tests will take place in a special railway circuit, before going back to Italy where it will complete the tests in the national network railway.

Also, the Pop will be presented at Innotrans 2018, the most prestigious international transport fair, from 18 to 20 September 2018 in Berlin.

Tiziano Onesti and Orazio Iacono, respectively President and CEO of Trenitalia were among those present at the ceremony in Savigliano, together with the Italian Alstom management, Michele Viale, CEO of Alstom Ferroviaria and Davide Viale, Director of the Alstom site of Savigliano.

"We are about to change the life of Italian commuters with a 4.5 billion investment plan in new train. - said Orazio Iacono, CEO of Trenitalia - The new Pop, more performing, ecological and technological than previous models, is at the core of this industrial operation that, is unprecedented in Italy, given its economic value and number of trains purchased. Pop has been designed around the needs of Trenitalia's commuters and staff who will have to work on it: more convenient, more sustainable and more accessible for everyone, included people with reduced mobility and disability. It will be in service in all the Italian regions where Trenitalia has already signed or will sign with the Administrations long-term service contracts. The latter satisfies the mobility demand of citizens in terms of quantity, capacity and internal layout, which will be in line with the needs expressed by the Regions. By 2024 - concluded Iacono - we will renew 80% of our regional fleet and the average age at national level will decrease from the current 20 to 9 years ".

"We are proud to present the first POP vehicle to our client Trenitalia and to the Italian regions. POP represents Alstoms latest generation of our regional train Coradia Stream a fully adaptable, sustainable and technological train designed to meet the full range of passenger needs. We are pleased that Trenitalia has renewed its confidence in Alstom as a reliable partner delivering quality products, said Michele Viale, Managing Director of Alstom in Italy and Switzerland.

The train Pop is a low-floor, high-performance single-deck electric multiple unit (EMU) composed of 3 or 4 cars, equipped with 4 traction motors. It can travel at a maximum speed of 160 km/h and can seat more than 300 passengers in the 4-car version and more than 200 in the 3-car one.

The possibility of customising the train is one of its unique characteristics. Alstom has developed an on-board configurator, which allows the Italian regions to choose from a variety of interior layouts and modify the seating arrangement according to the type of passenger service requested.

The technology is a further element of train differentiation. Pop is equipped with an information system integrated with the Trenitalia ground infrastructure, offers audio and video infotainment service with LCD display visible from all vehicle areas, as well as Wi-Fi accessible to passengers and crew. Passenger safety is ensured by a system of digital video surveillance with visualization on the monitors of the images taken in the compartments.

As important is the respect of eco-sustainability and energy efficiency criteria. Pop is 95% recyclable and consumes less energy than previous generations of EMUs.

The Pop trains are part of a framework agreement signed in August 2016 with Trenitalia for the supply of 150 medium capacity regional trains.