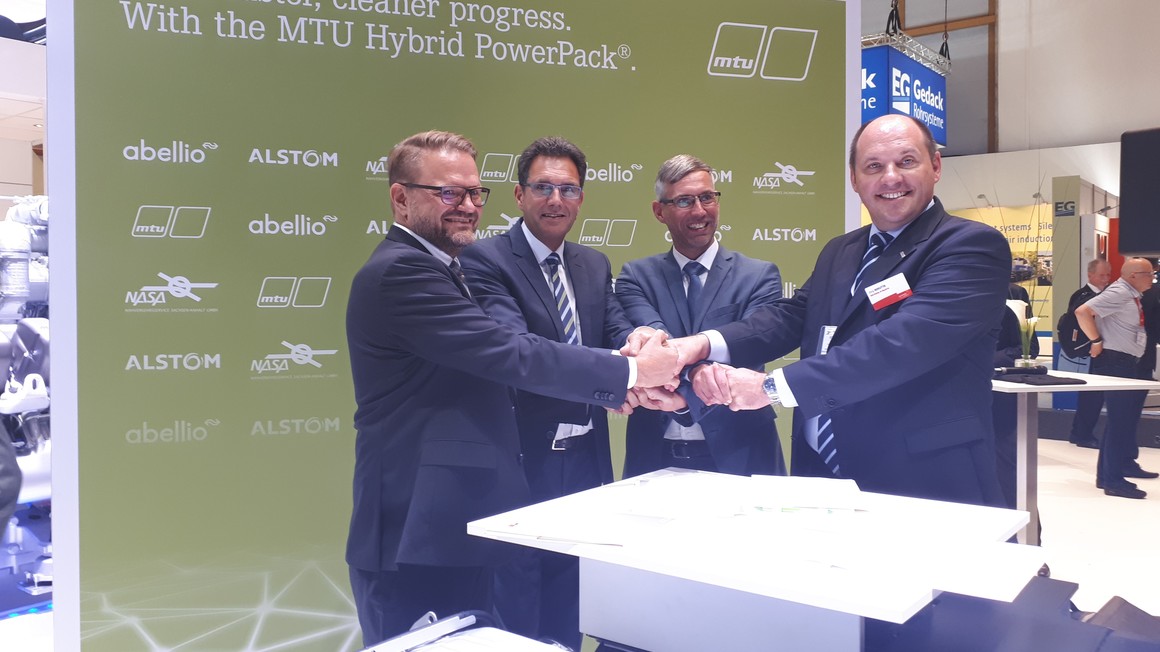 Abellio Rail Mitteldeutschland, Alstom, Nahverkehrsservice Sachsen-Anhalt GmbH (NASA) and Rolls-Royce plan to jointly implement a new hybrid drive solution on Abellio’s fleet of Coradia Lint diesel trains. Today, the four companies agreed to conduct technical feasibility studies regarding the integration of hybrid drives developed by MTU, a Rolls-Royce brand, into Coradia Lint rail vehicles and their use on routes of Dieselnetz Saxony-Anhalt, a diesel-powered rail network in Germany. The four partners plan to sign a contract covering the retrofit of at least three vehicles once the studies have been successfully concluded and financing is secured. To this effect, the companies signed a letter of intent at Innotrans, the world’s leading trade fair for railway and transport technology. Subsequent conversion of the entire fleet of 54 Coradia Lint vehicles is under consideration. The hybrid drives combine a modern diesel engine with an electric motor and batteries to recover braking energy, reducing fuel consumption and CO2 emissions by up to 25 percent. In addition, the ability to run under battery power only can reduce noise pollution in city areas and stations by 75 percent (20 dB(A)).

Stephan Schreier, Managing Director, Operations at Abellio, said: “As one of the largest operators of local rail passenger transport services in Saxony-Anhalt, we are aware of the special role we play in climate protection and, with this project, are pressing ahead unswervingly in the transition to lower-emission solutions.”

Dr Jörg Nikutta, Managing Director Germany and Austria at Alstom, said: “Alternative drive systems have become an important aspect of rail transportation. Alstom has been leading the way in this for many years now to reduce emissions. It is important for us, working with our partners, to add a new feature to our well-proven diesel train Coradia Lint and offer a hybrid traction solution that is quickly available and delivers immediate benefits for travellers and the environment.”

Rüdiger Malter, Managing Director at NASA, said: “The state of Saxony-Anhalt is very active on behalf of alternative drive solutions and low-emission transport. The planned hybrid trains are an important contribution to environmentally friendly rail travel which can be realized within a short time.”

Lars Kräft, Vice President Industrial Business at Rolls-Royce Power Systems, said: “Our MTU Hybrid PowerPack is a pioneering high-tech drive system combining the benefits of battery and diesel-powered trains without the need for additional infrastructure. We look forward to working with our partners to bring this technology into regular service here in Germany.”

Abellio is due to commence passenger services on behalf of the state of Saxony-Anhalt in December 2018 on 16 non-electrified lines in Saxony-Anhalt using 54 Coradia Lint trains. The contract covering the conversion of the first three of these vehicles to MTU hybrid drives is planned to be signed by the end of 2018. The conversion program is expected to take less than three years and will start operating in pilot mode to collect findings related to a normal daily use of a hybrid fleet.

The Coradia Lint is a fuel-efficient diesel multiple unit (DMU) that can reach operating speeds of up to 140 kph. It is powered by two MTU PowerPacks, each based on the MTU Series 1800 engine that meets the strict requirements of the current EU Stage IIIB emissions directive. The Hybrid PowerPack is an even more environmentally friendly version of this proven drive system: It combines an MTU diesel engine plus an electric machine, which can be used either as an electric motor or generator, and the MTU EnergyPack battery system, which stores the energy recovered during braking. This enables very low-noise, emissions-free battery-only electric operation in urban areas and around stations. The total operating costs of rail vehicles with MTU hybrid drives are also significantly lower. Even brake pads and discs have reduced wear due to brake energy recuperation. Because of the additional power of the electric machine, train operators also have the possibility to make up time delays using the improved drive dynamics and acceleration.

The Coradia Lint is part of Alstom’s Coradia range of modular trains which benefit from more than 30 years of service experience and proven technical solutions. Over 2800 Coradia trains have been sold to date, with 2300 of them currently operating in Denmark, France, Germany, Italy, Luxembourg, the Netherlands, Sweden and Canada.