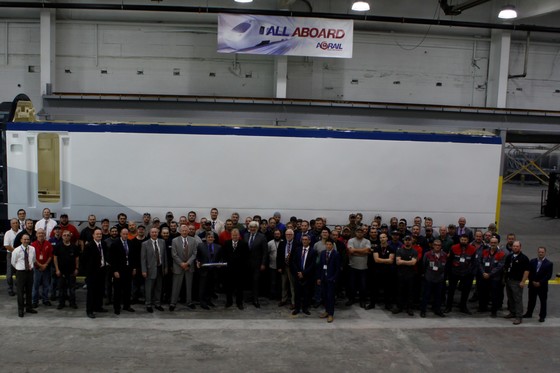 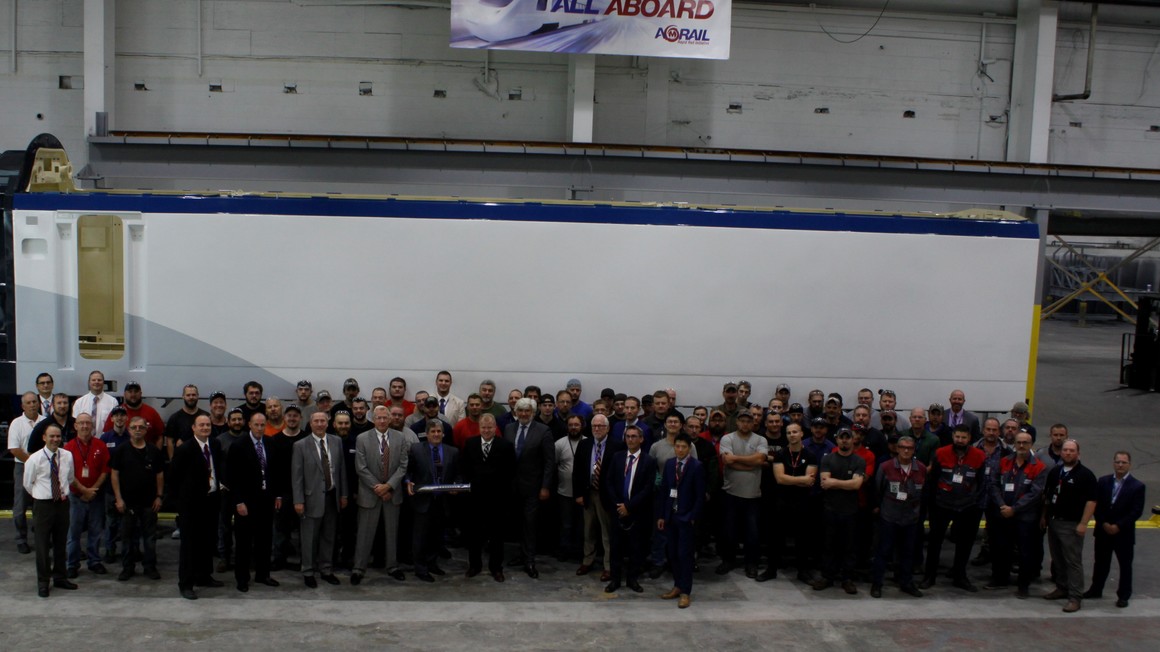 September 13, 2018 - Alstom and Merrill Technologies Group (Merrill) celebrated the completion of the first power car bodyshell for the future Avelia Liberty trainsets to serve as the new Acela Express fleet on the Amtrak Northeast Corridor, highlighting a major milestone in production of the new Acela fleet.

The power car bodyshells are made from 100% U.S. steel and have been specifically painted to reflect the Amtrak blue and white colors. Approximately 175 workers at Merrill’s Alma, MI, facility are working on the manufacturing of the 56 bodyshells for Alstom. The first bodyshell will arrive at Alstom’s passenger rolling stock center of excellence in Hornell, NY, in the coming weeks, where Alstom will complete the manufacturing of the power cars.

“We proudly celebrate this project milestone, not only with respect to supplying Amtrak with new trainsets, but also the emergence of a high-speed rail manufacturing industry here in the U.S.,” said Jérôme Wallut, Senior Vice-President of Alstom in North America. “We look forward to receiving all of the bodyshells and congratulate Merrill and their highly-specialized staff on the completion of this first unit for the new Avelia Liberty trainsets that will carry passengers on the Northeast Corridor.”

“Merrill is honored to partner with Alstom in their pursuit to grow high-speed rail manufacturing in the U.S.,” said Robert Yackel, Merrill CEO. “Completing the fabrication and painting of the inaugural bodyshell symbolizes the unlimited potential we can reach when companies and countries work together.”

Amtrak and the new Acela Express trainsets proudly rely upon U.S. manufacturing up and down the supply chain, from across America,” said Amtrak Vice President of the Northeast Corridor Service Line Caroline Decker.  “We thank Alstom for their commitment to supplier diversity and Merrill Industries for delivering a product that will power the new trainsets thus playing a critical role in the future of Amtrak’s service on the Northeast Corridor.”

In 2016, Alstom and Amtrak announced a contract for 28 next-generation Avelia Liberty trainsets to serve the Acela Express and for long-term technical support and the supply of spare components and parts for the long-term maintenance of the new trainsets. Alstom has the highest level of Buy America content among rail companies doing business in the U.S., working with over 500 U.S. suppliers, including partnerships with DBE, SBE and Veteran firms. The new trainsets will be 95% Made in America and will create 1,000 directed and 300 indirect jobs.

The Avelia Liberty is the latest development of Alstom’s Avelia high-speed train range. The new trainset will be able to carry nearly 30% more passengers than the current Acela trains. The trainset configuration includes two innovative compact power cars and nine passenger vehicles, with the possibility of three more being added if demand grows. The train can travel at speeds up to 300 km/h (186 mph). Each concentrated power car is equipped with Alstom’s pioneering Crash Energy Management system.

Alstom’s facility in Hornell dates to the 1860s and has manufactured over 2,000 new rail cars, and refurbished over 5,000 more, as well as manufactured over 8,000 traction cases. The site, which boasts 700,000 ft2 of manufacturing space is comprised of engineering, manufacturing and assembly facilities, paint, water test, and inspection facilities, a climatic chamber and a test track. More than 800 Alstom employees in Hornell are currently overhauling vehicles for transit authorities and operators such as Massachusetts Bay Transportation Authority, Maryland Transit Administration and Port Authority Transit Corporation, in addition to manufacturing the next generation Avelia Liberty high-speed trainsets for Amtrak.