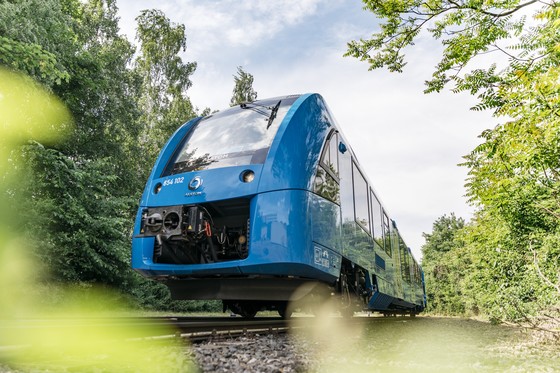 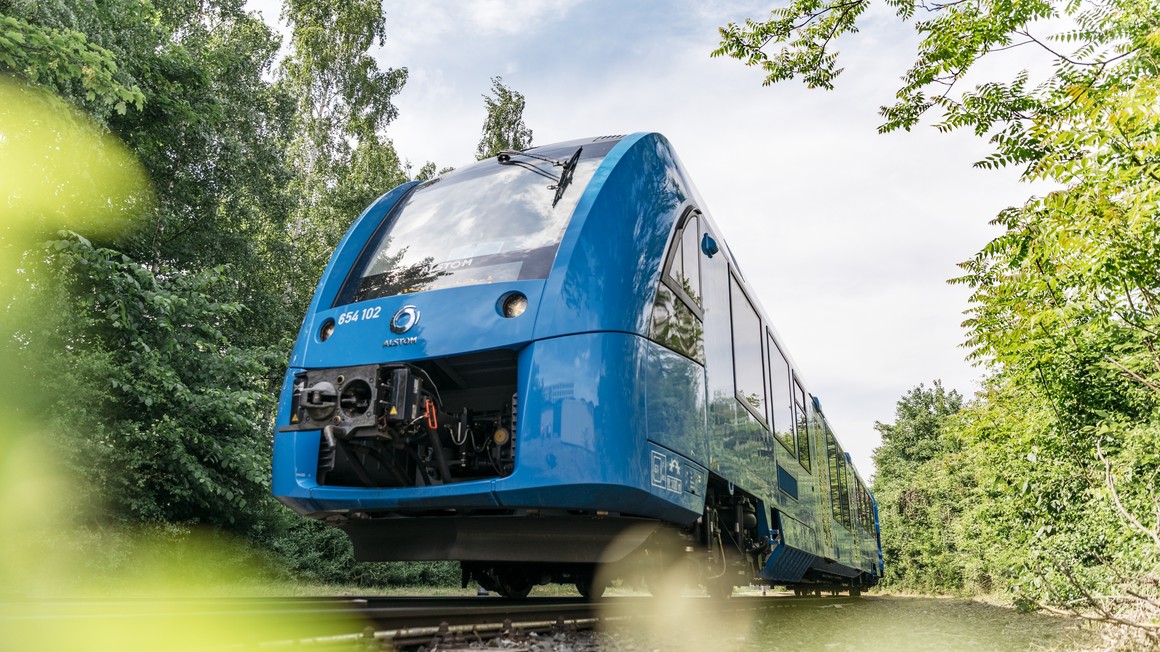 Bremervörde, 16 September 2018 - It was a world premiere being celebrated by Alstom, one of Europe’s largest railway manufacturers, the Minister of Economy and Transport of Lower Saxony, the Federal Ministry of Transport and the transport authorities of Landesnahverkehrsgesellschaft Niedersachsen (LNVG) and Eisenbahnen und Verkehrsbetriebe Elbe-Weser (EVB) in Bremervörde on Sunday 16 September. Before the many guests and members of the press from Germany and abroad, the world’s first hydrogen fuel cell train rolled into the station. The Coradia iLint, built by Alstom in Salzgitter, Germany, is equipped with fuel cells which convert hydrogen and oxygen into electricity, thus eliminating pollutant emissions related to propulsion. From 17 September onwards, two such trains will enter commercial service according to a fixed timetable in Lower Saxony.

For the time being, it is travellers in EVB’s Elbe-Weser network who can look forward to a world-first journey on the low-noise, zero-emission trains that reach up to 140 km/h. On behalf of LNVG, the Coradia iLint trains will be operated on nearly 100km of line running between Cuxhaven, Bremerhaven, Bremervörde and Buxtehude, replacing EVB’s existing diesel fleet. The new trains will be fuelled at a mobile hydrogen filling station. The gaseous hydrogen will be pumped into the trains from a 40-foot-high steel container next to the tracks at Bremervörde station. With one tank, they can run throughout the network the whole day, thanks to a total autonomy of 1000 km. A stationary filling station on EVB premises is scheduled to go into operation in 2021, when Alstom will deliver a further 14 Coradia iLint trains to LNVG.

"This is a revolution for Alstom and for the future of mobility. The world’s first hydrogen fuel cell train is entering passenger service and is ready for serial production,” emphasises Henri Poupart-Lafarge, Chairman and CEO of Alstom. “The Coradia iLint heralds a new era in emission-free rail transport. It is an innovation that results from French-German teamwork and exemplifies successful cross-border cooperation.”

Dr. Bernd Althusmann, Lower Saxony’s Minister of Economy and Transport, whose department has supported LNVG’s purchase of another 14 hydrogen trains with more than €81 million, is impressed: “With the test operation starting today, Lower Saxony is performing real pioneering work in local transport in cooperation with Alstom and EVB. The emission-free drive technology of the Coradia iLint provides a climate-friendly alternative to conventional diesel trains, particularly on non-electrified lines,” he explains. “In successfully proving the operability of the fuel cell technology in daily service, we will set the course for rail transport to be largely operated climate-friendly and emission-free in the future. The state government of Lower Saxony is proud of putting this trendsetting project on the track together with LNVG.”

The federal government has actively supported the development and testing of the new drive technology in Lower Saxony by providing funds from the National Innovation Programme for Hydrogen and Fuel Cell Technology.

Enak Ferlemann, Federal Government Commissioner for Rail Transport and Parliamentary State Secretary of the Federal Ministry of Transport and Digital Infrastructure, puts it in a nutshell: “A world premiere in Germany. We are putting the first passenger train with fuel cell technology on the track. This is a strong sign for the mobility of the future. Hydrogen is a real, low-emission and efficient alternative to diesel. These trains can be operated cleanly and in an environmentally friendly way, especially on secondary lines where overhead lines are uneconomical or not available yet.” He added: “We therefore support and fund this technology, in order to expand it.”

For LNVG chief Carmen Schwabl, whose authority organizes the rail passenger transport between the North Sea and the Harz mountains and therefore pays annual compensation of around €300 million to the railway companies, the entry to fuel cell technology is also a strategic decision. She sees LNVG in a national pioneering role: “With the two Coradia iLint trains and with the use of another 14 hydrogen trains from the end of 2021, we are the first passenger rail transport authority to replace existing diesel vehicles by emission-free vehicles, thus contributing better to the fulfilment of the climate protection goals.” LNVG’s Managing Director looks further into the future: “We also do this because about 120 diesel trainsets in our vehicle pool will reach the end of their lifetime within the next 30 years, meaning we will have to replace them. The experience gained with this project helps us find a sustainable and practical solution.”

With around 2 million rail passengers and around 4 million bus passengers per year, EVB figures among the largest mobility providers in the Elbe-Weser triangle. The traditional company, which boasts a history of more than 100 years and around 550 employees, is looking forward to the “train of the future”.  Dr. Marcel Frank, Managing Director of EVB, emphasizes: “It is a great milestone that we will use the world’s first hydrogen-powered train in our Elbe-Weser network in passenger service between Cuxhaven, Bremerhaven, Bremervörde and Buxtehude, not only for the region and for us, but also for passenger rail transport worldwide. For EVB, this is the entry to emission-free mobility.”

Pictures of the event: reneframpe.com/clients/evb