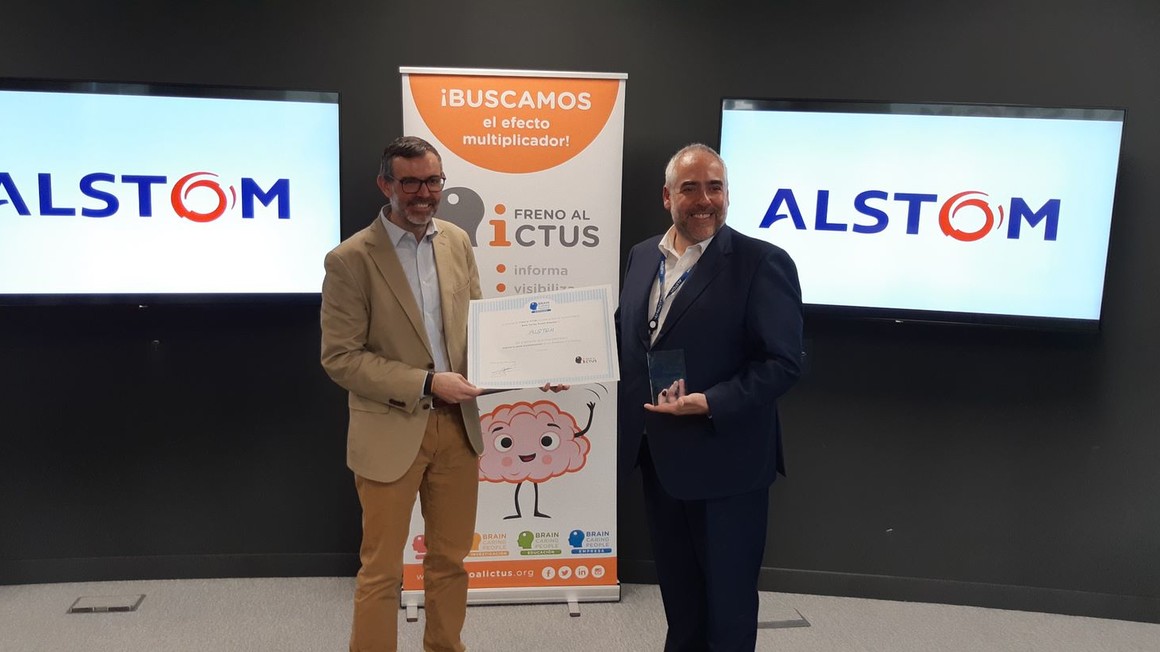 Madrid, 1 February 2019   - The Freno al Ictus Association has awarded  Alstom with the “Brain Caring People Company” distinction for its commitment and activities to raise awareness among the employees to  prevent  and detect strokes. Stroke, which affects one in six people in Spain, is the first cause of death worldwide.

The “Brain Caring People Company” seal has the support of the Spanish Neurology Society (SEN), the Brain Foundation and the Spanish Association of Labour Prevention Services (AESPLA). The award was received by Alstom’s Human Resources Director in Spain, José Antonio Rodríguez. The event was completed with an awareness initiative addressed to the company's employees in Madrid.

"For Alstom it is an honour to obtain this recognition" , said José Antonio Rodríguez. "We have a special commitment with our professionals to promote health and safety and, specifically, in the prevention area. Therefore, learning to detect and, above all, prevent diseases such as stroke, which in 90% of cases can be prevented, is key for us”, added José Antonio Rodríguez.

For Julio Agredano, President of the Freno al Ictus Association, “collaborating with companies such as Alstom, which are committed to the health of their employees, encourages us to proceed with our goal of reducing the impact of strokes in our country through our business network. This disease is quite unknown despite the fact that 45% of the work-related deaths are related to heart attacks or strokes”.

Last year, Freno al Ictus Association visited Alstom offices in Spain several times  for training sessions and to raise awareness on the most frequent symptoms to detect strokes, what to do when it happens, and how to prevent it. Additionally, the company held an informative campaign on cerebrovascular health to over 2,000 professionals.

Strokes are the second cause of death in Spain (the first in women), the first cause of acquired disability in adults and the second cause for dementia. According to the data of the Spanish Neurology Society (SEN), each year 120,000 people suffer from a stroke in our country, of which, 50% suffer from consequences, disabilities, or die. Currently, over 330,000 people have suffered from a stroke. 90% of strokes could have been avoided with appropriate risk-factor prevention and a healthy lifestyle.