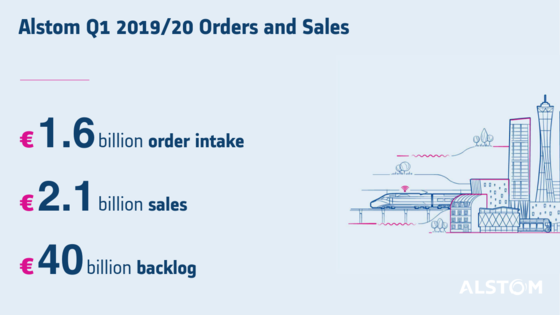 At €40 billion on 30 June 2019, the current backlog provides strong visibility on future sales.

“During this first quarter, we won several key orders related with our latest innovations: the ebus Aptis and the Coradia iLint, the world’s first hydrogen train. We also successfully delivered two important projects: the first Coradia Stream “Pop” train in Italy and the Sydney North West Metro. This demonstrates the strengths of Alstom in terms of smart and green innovation as well as efficient delivery, two pillars of our newly launched Alstom in Motion Strategic plan.” said Henri Poupart-Lafarge, Alstom Chairman and Chief Executive Officer.

During the first quarter of 2019/20, Alstom recorded €1.6 billion of orders, with a large Rolling stock orders intake in Europe, notably in Germany with a major contract of Coradia iLint trains for the Hessen region and for the Hamburg metro, in France with Coradia Polyvalent trains, and in both Netherlands and Italy with additional Coradia Stream trains. The group was also awarded Signalling contracts in Europe and Asia-Pacific. The Q1 2019/20 order book compares to last year’s Q1 orders of €2.6bn which included the large contract for the Montreal driverless light metro system.

Sales, at €2.1 billion, were up 2% (+1% organic) in the first quarter 2019/20, compared to the same period last year, with a decrease in Systems balanced by a notable growth in Signalling and Rolling stock. Sales were mainly fuelled by system projects in the Middle East, rolling stock contracts in Europe mainly with the Coradia product family delivering sales in France, Germany, Italy and the Netherlands and the Amtrak contract in the US.

In May 2019, the Sydney North West Metro line delivered by Alstom entered into commercial service. It represents Australia’s biggest public transport project and the first fully automated metro project in the country, with one million commuters travelling the line within two weeks.

In June 2019, the first three regional Coradia Stream “Pop” trains, out of a total of 47 trains destined for Emilia Romagna, entered into passenger services.

Alstom confirms the development of innovative products and its commitment towards more sustainable solutions with several orders over the quarter for Aptis ebuses in Paris, Grenoble and La Rochelle and a major order of Hydrogen Coradia iLint trains with RMV in Germany for the renewal of diesel trains.

In June 2019, after becoming the first French company to obtain the AFAQ ISO 37001 Anti-bribery certification for France and Europe in 2017, followed by Asia-Pacific in 2018, Alstom has obtained certification for its countries of operation in the regions of North America, Middle-East & Africa and Latin America.

Alstom hosted on 24 June 2019 in Paris a Capital Markets Day for financial analysts and investors. During this event, Alstom presented its new strategic plan – AiM Alstom in Motion, as well as new financial objectives until 2023.

The 2019/20 fiscal year will be a year of stabilisation of growth after a 2018/19 fiscal year with an exceptional sales and profitability growth. For 2019/20 fiscal year, the business cycle with the finalisation of major systems contracts and the evolution of large Rolling stock projects will lead to a sales and margin growth lower than the average objectives set in the context of AiM, and to a working capital evolution impacting the generation of free cash flow.

Order backlog corresponds to the transaction price allocated to the remaining performance obligations, as per IFRS15 standard quantitative and qualitative disclosures requirements.

Going forward (1st application for Half Year 2019/2020 publication), Alstom has opted for the inclusion of the share in net income of the equity-accounted investments into the aEBIT when these are considered as part of the operating activities of the Group (because there are significant operational flows and/or common project execution with these entities), namely the CASCO Joint Venture. The company believes that bringing visibility over a key contributor to the Alstom signalling strategy will provide a fairer and more accurate picture of the overall commercial & operational performance of the Group. This change will also enable more comparability with what similar market players define as being part of their main non-GAAP ‘profit’ aggregate disclosure.

- capital gains or loss/revaluation on investments disposals or controls changes of an entity;

- and including the share in net income of the operational equity-accounted investments.

The pay-out ratio is calculated by dividing the amount of the overall dividend with the "Net profit from continuing operations attributable to equity holders of the parent” as presented in the consolidated income statement.