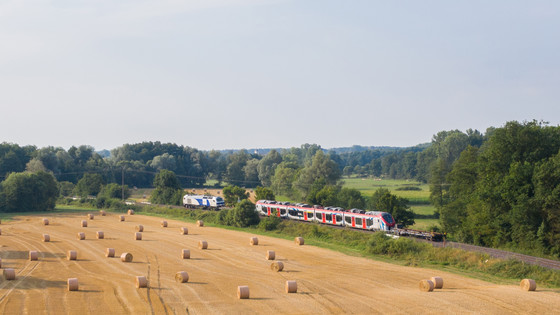 27 August 2019 – Alstom has delivered the first five Coradia Polyvalent Léman Express trains for the cross-border CEVA[1] line to the SNCF Technicentre in Annemasse. Five trains will now be delivered each month until the end of November, with entry into commercial service scheduled for 15 December 2019. Since mid-August, Alstom's teams have been supporting SNCF in training drivers for these new trains.

A total of 17 trains from Alstom's Coradia Polyvalent range have been ordered[2] by SNCF, financed entirely by the region of Auvergne-Rhône-Alpes, to run on the Léman Express, Europe's largest cross-border rail network (45 stations, 230 km). The Coradia Polyvalent Léman Express trains contribute to providing a sustainable alternative to the car for the daily commutes of Greater Geneva’s residents, as well as a better service to the economic and tourist hubs of the entire region. Today, just 16% of the 550,000 daily cross-border trips are made on public transport.

The Coradia Polyvalent Léman Express trains belong to Alstom's Coradia range, of which 348 trains have been sold to 9 French regions[3] as part of the contract awarded to Alstom by SNCF in October 2009. The fleet has already covered more than 50 million kilometres in commercial service.

The trains have been adapted to the specific characteristics of the Franco-Swiss cross-border CEVA line: configured in their suburban version, each 72-metre train can carry up to 204 seated passengers at speeds of up to 140 km/h, in accordance with Swiss certification. Designed to ensure cross-border connections with ERTMS technology[4], Coradia Polyvalent Léman Express trains can run on several types of network voltages[5].

To optimise the fluidity of passenger exchanges and reduce stopping time in stations, the Coradia Polyvalent Léman Express trains are equipped with a full low floor, seven doors on each side, all with bridge plates, and a large reception area on the platforms. Coradia Polyvalent is the first train to comply with the PRM-TSI standard[6]. The interior offers increased comfort thanks to the seats equipped with individual reading lights and electrical sockets and the spaces dedicated to bicycles and luggage. Large windows and reduced noise levels also improve the quality of the journey.

The manufacturing of Coradia Polyvalent involves more than 4,000 jobs in France at Alstom and its suppliers. Six of Alstom's 13 sites in France are involved in the project: Reichshoffen for the design and assembly, Ornans for the engines, Le Creusot for the bogies, Tarbes for the traction chains, Villeurbanne for the on-board computerised systems and signalling products, and Saint-Ouen for the design.

[6] Technical specifications for interoperability relating to persons with reduced mobility