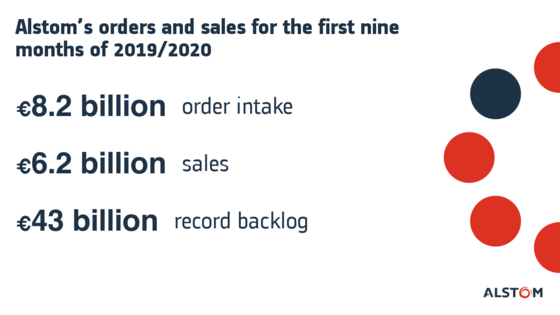 The backlog, on 31 December 2019, reaches a new historical record of €43 billion and provides strong visibility on future sales.

“Alstom’s order intake was particularly dynamic this quarter, benefiting from a strong momentum in Europe and Asia Pacific with a major contract for Perth’s rail network, as well as significant orders in Signalling and Services in line with our Alstom in Motion (AiM) strategy. The Group is also proud to have contributed to the start of commercial services of emblematic transport systems, such as the Leman express between Switzerland and France and Sydney Light Rail.

The rail market is clearly undergoing a very positive momentum, in particular driven by growing environmental concerns. We are fully committed to contribute to the shift to a decarbonated future thanks to our portfolio of sustainable mobility solutions.” said Henri Poupart-Lafarge, Alstom Chairman and Chief Executive Officer.

During the third quarter of 2019/20 (from 1 October to 31 December 2019), Alstom recorded €3,563 million of orders, versus €3,386 million in Q3 2018/2019. Europe accounts for the majority of the orders of the Group with notably a €755 million contract to refurbish and maintain Avanti West Coast Pendolinos in the United Kingdom and the renewal and automation of Marseille metro. It also includes 44 new generation metro trains for Île-de-France Mobilités and RATP in consortium with Bombardier within a major frame contract for a total of up to 410 trains. Alstom also achieved a strong order intake in Asia Pacific at €1,276 million with a combined €800 million contract for rolling stock and maintenance for Perth’s rail network in Australia, as well as driverless trains and digital signalling system for Sydney Metro extension.

Orders in Signalling and Services were particularly positive with respectively €593 million and €1,266 million booked during the quarter.

Regarding sales, €2,060 million were traded in the third quarter 2019/20 (from 1 October to 31 December 2019) versus €2,010 in Q3 2018/19. Compared to the first nine months of 2018/19, Rolling Stock sales grew by 11% with the acceleration of major projects this quarter. Services show a slight decrease at 2%. Systems show a foreseen decline, by 22%, due notably to a fully traded contract for Panama Metro and contracts nearing completion in Middle-East. Signalling sales increased strongly by 16%, in coherence with our AiM strategy, with contracts executed mainly in Americas, Asia Pacific and Europe.

In October 2019 Alstom has successfully carried out the issuance of senior unsecured Eurobonds for a total of €700 million, at excellent financing conditions. The bonds have a seven-year maturity and a
fixed coupon of 0.25%, payable annually. The order book was more than three times oversubscribed.

In December 2019, Sydney Light Rail commenced revenue service and will contribute to transform the appeal of the city of Sydney. Alstom, as part of the ALTRAC Light Rail consortium, has been responsible for the integrated light rail system. The tram system integrates innovative power solutions, with a wire-free APS ground-based power supply and Hesop energy recovery substations.

French-Swiss Leman Express rail network started service with 17 Coradia Polyvalent and on-board digital solutions implemented by Alstom on 23 other trains, allowing cross-border operations. The Coradia Polyvalent Léman Express trains will contribute to providing a sustainable alternative to the car for the daily commutes of Greater Geneva’s residents, as well as a better service to the economic and tourist hubs of the entire region. The Leman Express is Europe's largest cross-border rail network (45 stations, 230 km).

In the frame of Denmark’s countrywide signalling system replacement programme, Alstom is a first to supply full ERTMS[1] Level 2 on a Denmark corridor, the line to Roskilde to Köge, which opened for commercial service in December. The system is fully digital and combines both ERTMS trackside and on-board signalling, while being fully integrated with the Traffic Management System. This technology (“baseline 3”) represents the latest level of the standard, allowing to further increase traffic throughput. Alstom is the first player worldwide to offer this integrated system[2].

In line with the AiM strategy to be the leading global innovative player for a sustainable and smart mobility, Alstom committed during COP 25 to the “Science-Based Targets” initiative, a framework providing pathways to set ambitious greenhouse gas reduction targets. This will enable us to be fully consistent with the objectives stated by the Paris agreement to keep global temperature rise below 2 degrees Celsius. Alstom is the first train manufacturer to commit to set such a target.

The 2019/20 fiscal year will be a year of stabilisation of growth after a 2018/19 fiscal year with an exceptional sales and profitability growth. For 2019/20 fiscal year, the business cycle with the finalisation of major systems contracts and the evolution of large Rolling stock projects will lead to a sales and margin growth lower than the average objectives set in the context of AiM, and to a working capital evolution impacting the generation of free cash flow[3].

Going forward (1st application for Half Year 2019/2020 publication), Alstom has opted for the inclusion of the share in net income of the equity-accounted investments into the aEBIT when these are considered as part of the operating activities of the Group (because there are significant operational flows and/or common project execution with these entities), namely the CASCO Joint Venture. The company believes that bringing visibility over a key contributor to the Alstom signalling strategy will provide a fairer and more accurate picture of the overall commercial & operational performance of the Group. This change will also enable more comparability with what similar market players define as being part of their main non-GAAP ‘profit’ aggregate disclosure.