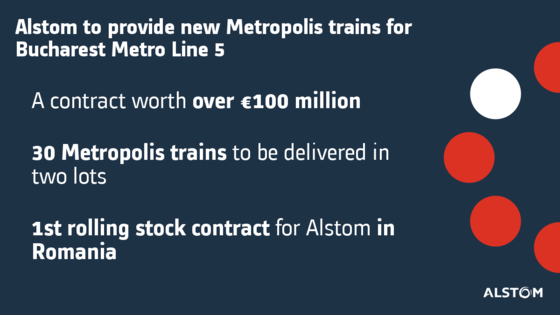 3 November 2020 – Alstom has been awarded a contract by Metrorex SA, the state-owned Bucharest metro operator, to provide a total of up to 30 Metropolis trains to run on the newly built Line 5 of the city’s metro network, delivered in two lots. The value of the contract for the first 13 trains is over €100 million.* This contract can be extended with an option for another 17 trains, based on customer’s order, the total estimated value of the project could go up to €240 million.

“We are very proud of this award, especially as it will see Alstom trains running for the first time in Romania. Alstom’s world-class metro expertise has been appreciated all over the world over the last 30 years and now the Romanian passengers will be able to enjoy it as well. We are happy to see our leadership in train production, in addition to maintenance, recognised by our Romanian customer,” said Gabriel Stanciu, Alstom Managing Director for Romania, Bulgaria and Republic of Moldova.

Each of the six-car trains for Bucharest will have 216 seats in a longitudinal seating arrangement and provide two special access areas for passengers with limited mobility. The trains have a specific configuration, customised for Bucharest metro: stainless steel car body shells, 114 metres long and 3 metres wide, providing a total capacity of 1,200 passengers. The final configuration, colours and finishes will be fully customised according to the requirements of the customer, to be established during the collaborative design stage. The trains will have onboard CBTC units, to be compatible with the latest trackside signalling technology.

Passengers will benefit from a range of innovations to make the joureys more efficient and more comfortable, including internal noise attenuation, four double doors per car per side, large windows, LED lighting and real-time passenger information, such as dynamic route map. The trains have features that allow for optimum passenger flow: wide doors, large gangways and dedicated areas for people with disabilities.

Alstom’s Metropolis range of metro trains has been in operation for over 20 years worldwide, its flexibility offering a wide range of possible configurations. Among Alstom’s 60 metro customers around the world feature the cities of Paris, New York, London, Amsterdam, Singapore, Riyadh, Dubai, Sydney and Montreal.