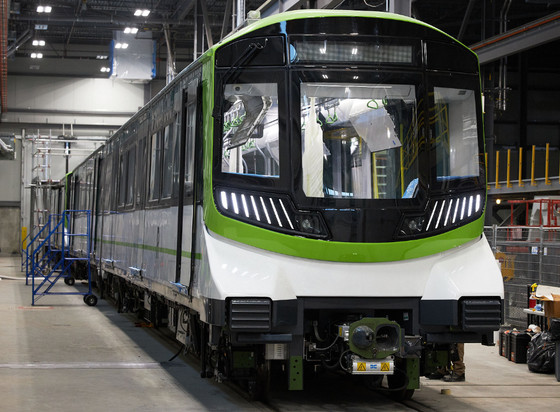 To date, Alstom has delivered four cars to Montreal. The cars for the REM are based on a proven Metropolis platform, already widely in service in the world, including in Sydney, and adapted for Montreal, not only in their design, their capacity, their accessibility, and to the experience they will offer passengers, but also to climatic conditions. The cars will form a single uninterrupted train for passengers, serving the mobility of Greater Montreal. The exterior livery, chosen by the public, was inspired by the Samuel-De Champlain Bridge and was designed to blend into the Montreal environment, offering passengers breath taking views via panoramic windows and large bay windows at either end.

Alstom is supplying REM with not only 212 Metropolis cars, or 106 trains, but also Alstom’s automated and driverless Urbalis 400 communication-based train control (CBTC) solution, an Alstom Iconis control centre, as well as platform screen doors and depot equipment for this fully automated light-metro system. Recognized as the supplier of choice for reliable and efficient metros, Alstom has delivered nearly 6,000 Metropolis cars to 25 cities around the world.

Awarded to the Groupe PMM consortium in early 2018, the REM project is the largest transit project in Quebec’s history since the construction of the Montreal metro over 50 years ago. REM will be one of the world’s largest automated transportation networks - 67 km long with 26 stations - connecting downtown Montreal to the South Shore, the North Shore, the West Island and the Montréal–Trudeau international Airport.

Alstom has been present in Canada for over 80 years. Headquartered in Montreal, Quebec, which is also home to the company’s global centre of expertise in research and development of integrated urban mobility control systems, the company also has office and manufacturing facilities in not only Sorel-Tracy, Quebec, but also in Ottawa, Toronto and Brampton, Ontario. With two sustainable industrial locations, and long-term structuring mobility projects and offices across the country, Alstom is a proud Canadian mobility player developing not only the future of transportation but also of the economy, industry and employment in the country.