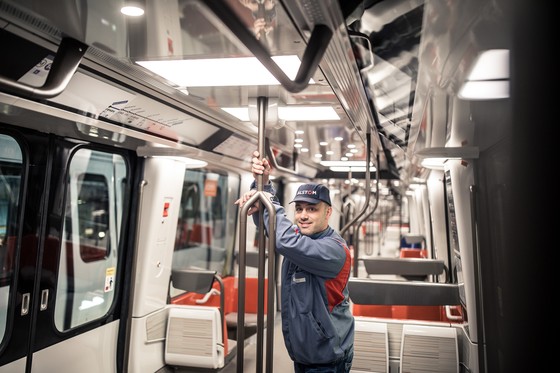 14 December 2020 – Alstom's automatic MP14 metros have entered commercial service on the extension of Line 14 to the station Mairie de Saint-Ouen. The extension was inaugurated today by Jean Castex, Prime Minister, Barbara Pompili, Minister of Ecological Transition, Jean-Baptiste Djebarri, Minister Delegate to the Minister of Ecological Transition in charge of Transport, Valérie Pécresse, President of the Île-de-France Regional Council and Île-de-France Mobilités and Catherine Guillouard, CEO of the RATP group, and in the presence of Henri Poupart Lafarge, CEO of Alstom. The MP14 metro now serves the whole of line 14, from Olympiades to Mairie de Saint-Ouen, next to which many companies are located, including the Île-de-France Regional Council and the global headquarters of the Alstom group.

“We are particularly proud to see the MP14 metros entering commercial service as far as the station Mairie de Saint-Ouen. These metros, which we designed and manufactured at eight Alstom sites in France, now serve the head office of the Alstom group. The arrival of the MP14 metros will directly improve the daily lives of tens of thousands of people, including the 3,000 employees of the Alstom group based in Saint-Ouen. This site is the group's global headquarters and the biggest centre of railway expertise in Europe,” declared Henri Poupart-Lafarge, Chairman and CEO of Alstom.

MP14, commissioned on Line 14 and financed by Île-de-France Mobilités and operated by RATP, is an automated, rubber-tyred metro made up of eight cars. This state-of-the-art train is designed to improve passenger experience while reconciling performance, energy efficiency and ease of maintenance in order to keep costs down throughout its lifecycle.

MP14 offers unprecedented levels of comfort and safety thanks to its interior layout and seats designed like an alcove to create both conviviality and privacy. Vast reception areas offer accessibility to all passengers, with dedicated areas and boomerang-shaped seats to improve the fluidity of passenger flows and capacity of the trains. MP14 also has LED lighting efficiently distributed throughout the metro to provide a sense of security through consistent luminosity. The handrails and steadying points are compliant with standards and enhance comfort inside the train. Warm and cool ventilation controls the ambient temperature, whatever the season. MP14 also offers comprehensive video protection and dynamic passenger information on board. The design of the new metro is underlined by signature lighting on the front end of the train.

MP14's 100% electric braking system captures energy and re-injects it into the network as electricity, while limiting the emission of fine particles caused by the mechanical brakes. This system reduces the overall energy consumption of the metros, as well as air pollution, by up to 17%[1]. MP14 is also 40% quieter (-2 dB) with a 95% recyclability rate. The interior fittings are modular. The metro can therefore be modified over time, enabling maintenance throughout its entire lifespan.

Eight of Alstom's 14 sites in France are involved this project: Valenciennes for the studies, integration, validation and testing, Le Creusot for the bogies, Ornans for the engines, Villeurbanne for the on-board computerised systems, Tarbes for the traction, Aix-en-Provence for the safety IT, Reichshoffen for the collision studies and Saint-Ouen for the design.

[1] Compared to the previous generations of comparable MP05 metros.

[2] Communication Based Train Control is an automatic rail traffic control system based on continuous communication between the train and computers in charge of controlling the traffic.