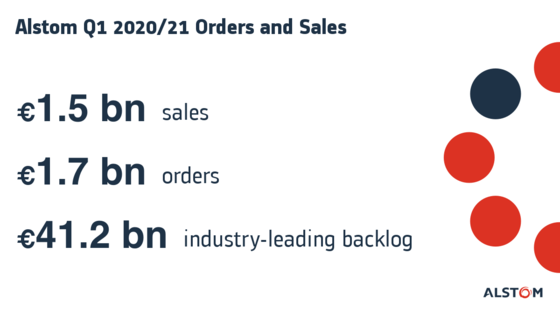 At €41.2 billion on 30 June 2020, the current backlog provides a strong indication of future sales.

“During the first quarter, the Group’s level of sales was impacted by the consequences of the Covid-19 containment measures: while we achieved a very good continuity of our engineering activity through remote working, lockdowns impacted our sites and supply chain. Yet, the Group’s commercial activity remained stable despite the crisis. Announcements of governments worldwide in support of rail show that the train is more than ever recognized as a way to support the transition towards more sustainable mobility.” said Henri Poupart-Lafarge, Alstom’s Chairman and Chief Executive Officer.

During the first quarter of 2020/21, Alstom recorded €1,651 million of orders which compares to €1,620 million for the first quarter of 2019/20. This sustained order intake, despite the crisis, was mainly fueled by a large Rolling stock and Services order in AMECA and a metro system order in Taipei, Taiwan. The Group was also awarded various Services contracts for instance in Mexico, China, the United States and Greece. Signalling contracts were also booked in Europe and the United States.

Sales, at €1,507 million, were down 27% (-25% on an organic basis) in the first quarter of 2020/21, compared to the same period last year. This decrease is mainly caused by the impact of the Covid-19 crisis, in particular on Rolling Stock due to the slowdown of sales recognition during the containment period, to a lesser extent on Services due to train traffic reduction and Signalling due to a slowdown in installation. Additionally, as anticipated for fiscal year 2020/21, Systems sales decreased with contracts nearing completion in Dubaï, Riyadh and a fully traded contract in Panama.

As of July 16, Alstom’s operations are close to a normalized level. Supply chain is resuming in line with manufacturing operations.

On June 30, Alstom took a new step forward in the implementation of its AiM strategic plan in France with the acquisition of Ibre, a company specialised in the development, manufacture and supply of cast iron or steel brake discs. With this acquisition, Alstom will reinforce its internal capabilities regarding railway braking systems, which are essential to the overall dynamic performance of trains. Ibre employs around 30 people at its Sens site in the region of Bourgogne Franche-Comté and had a turnover of approximately €10 million in 2019.

The German Federal Ministry of Economics has presented Alstom with the "Innovation Prize for Regulatory Sandboxes", related to a planned test project to implement Automatic Train Operation (ATO) in daily passenger operation of regional trains. The project will begin in 2021. For this project, two trains based on Alstom’s successful Coradia Continental platform will be equipped with a European Train Control System (ETCS) and additional ATO equipment.

In May 2020, the first of the 12,000-horsepower Prima T8 electric locomotives was put into commercial service by Indian Railways. In line with the Make-in-India mandate, all 800 of the Prima locomotives are being manufactured locally.

Despite Covid-19, the two first Avelia Liberty prototypes started their testing programme at the Transport Technology Center in Pueblo, Colorado and along the North-East Corridor. In a context of travel restrictions and despite being over 8,000 km away, Alstom experts in Le Creusot (France) were able to participate in the tests. Sensors were capturing and transmitting test results to Le Creusot in real-time, allowing the team to analyse the test results.

Alstom announced on February 17, 2020 that it had signed a Memorandum of Understanding with Bombardier Inc. and Caisse de dépôt et placement du Québec (“CDPQ”) in view of the acquisition of Bombardier Transportation.

Following the notification of the transaction to the European Commission on June 11, 2020, Alstom has taken a further step towards closing of its planned acquisition of Bombardier Transportation. On July 9, Alstom submitted commitments to respond to the Commission’s potential concerns.

Closing of the acquisition of Bombardier Transportation remains on track for the first half of 2021.

Confirmation of the outlook provided on 12th May 2020

In 2019/20, Alstom fully deployed its Alstom in Motion (AiM) strategic plan in order to progressively deliver revenues and margin growth in line with the objectives set in the context of AiM for 2022/23.

The Covid-19 crisis is likely to affect negatively the financial performance of the 2020/21 fiscal year, including order intake, net income, free cash flow and sales, though it is not possible today to assess precisely its impact. After the current crisis, the Group expects a fast recovery of the rail market, sustained by strong fundamentals and increasing demand for sustainable mobility.

In this context, the objective of a 5% average annual growth rate over the period from 2019/20 to 2022/23 should be slightly impacted by the temporary slowdown of tender activity, yet the 2022/23 objectives of 9% aEBIT margin and of a conversion from net income to free cash flow above 80% are confirmed [1].

With a strong liquidity position, a demonstrated ability to deliver execution and profitability and the rapid launch of a cost and cash mitigation plan the Group is confident in its capacity to weather the crisis as well as to capture opportunities in a resilient rail market and contribute to the transition towards sustainable transport systems.

APPENDIX 1A – GEOGRAPHIC BREAKDOWN OF ORDERS AND SALES

APPENDIX 1B – PRODUCT BREAKDOWN OF ORDERS AND SALES

If the contract is denominated in a currency other than the functional currency of the reporting unit, the Group requires the immediate elimination of currency exposure using forward currency sales. Orders are then measured using the spot rate at inception of hedging instruments.

Order backlog represents sales not yet recognised from orders already received. Order backlog at the end of a financial year is computed as follows:

Order backlog corresponds to the transaction price allocated to the remaining performance obligations, as per IFRS 15 quantitative and qualitative disclosures requirement.

Starting in September 2019, Alstom has opted for the inclusion of the share in net income of the equity-accounted investments into the aEBIT when these are considered to be part of the operating activities of the Group (because there are significant operational flows and/or common project execution with these entities), namely the CASCO Joint Venture. The company believes that bringing visibility over a key contributor to the Alstom signalling strategy will provide a fairer and more accurate picture of the overall commercial & operational performance of the Group. This change will also enable more comparability with what similar market players define as being part of their main non-GAAP ‘profit’ aggregate disclosure.

Alstom uses free cash ﬂow both for internal analysis purposes as well as for external communication as the Group believes it provides accurate insight regarding the actual amount of cash generated or used by operations.