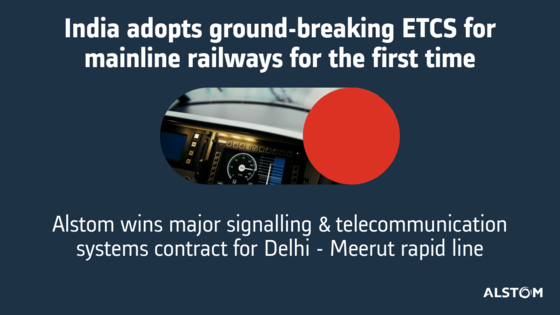 20 January 2020 – Alstom has won a contract[1] worth €106 million from the National Capital Region Transport Corporation Ltd. (NCRTC) to design, supply and install the signalling, train control and telecommunication system (Package 24) of the 82.15 km Delhi – Ghaziabad – Meerut Regional Rapid Transit System (RRTS) Corridor. NCRTC is a joint venture between the Government of India and States of Delhi, Haryana, Rajasthan and Uttar Pradesh. It is implementing RRTS, a first-of-its-kind semi-high-speed rail line which will reduce the journey time between Delhi and Meerut to just 60 minutes, compared to the current 90-100 minutes, and with a maximum speed of 160 km/h.

Alstom’s scope of work includes design, supply, installation, testing and commissioning of Signalling & Train Control, Supervision, Platform Screen Doors and Telecommunication Systems for the corridor. This line will be the first in India to adopt the European Train Control System (ETCS) hybrid Level 3[2] signalling system, which is the core signalling and train control component of the European Rail Traffic Management System (ERTMS).

“As leaders in digital mobility, we are thrilled to receive this contract and provide India’s first-ever line with the future proof signalling system. Alstom sees huge potential for the technology in the Indian market. We are looking forward to deploying our advanced technologies in a bid to revamp the mainline railway landscape,” said Ling Fang, Senior Vice President of Alstom Asia Pacific.

A key feature of the RRTS is interoperability of all its priority corridors which facilitates seamless commuter movement across the corridors, without the hassle of changing the trains for passengers. ETCS signalling system will not only facilitate interoperability but will also ensure train movement at quick frequencies, thus reducing the waiting time for passengers. The contract marks a world premiere for the combination of the latest ETCS standard supported by the latest digital Interlocking and Automatic Train Operation (ATO) over Long Term Evolution (LTE) radio. The integrated platform screen door solution will also provide utmost safety to passengers.

In October 2020, Alstom reaffirmed its leading position in digital rail technologies by becoming the first company to achieve full certification for the latest onboard and trackside ETCS standards. ETCS hybrid Level 3 optimises line capacity in complete safety by anticipating and adapting the speed of the trains through continuous train control and supervision via a radio-based signalling system. It is arguably the most efficient train control system in the world, bringing significant advantages combined with automatic train operation (ATO) in terms of maintenance cost and energy savings, safety, reliability, punctuality and traffic capacity. ETCS is a replacement for the legacy train protection systems and is designed to replace the many incompatible safety systems currently in operation, making it the train control system of choice for India, as well as, Australia, Taiwan, South Korea and Saudi Arabia.

Alstom’s Atlas ERTMS Level 2 and hybrid Level 3 are digital signalling solutions that allows trains to run at higher speeds without physical lineside signals. The company is a major supplier of onboard and trackside ETCS equipment via this solution, representing 70% of the world’s onboard rail systems in service and 18,000 kilometres of tracks worldwide. In total, Alstom has been contracted to equip 9,000 trains with Atlas onboard solutions, of which 1,100 vehicles will be equipped with the Baseline 3 Release 2 solution. Today, across 30 countries, Alstom has provided significant performance improvement for all ETCS standards, including the very first application of ETCS Level 3 in Germany.

[2] Hybrid Level 3 is a combination of ETCS Level 2 with shorter virtual section normally used in ETCS Level 3 for even higher performance.