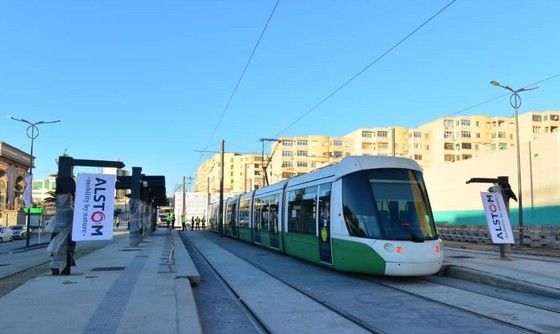 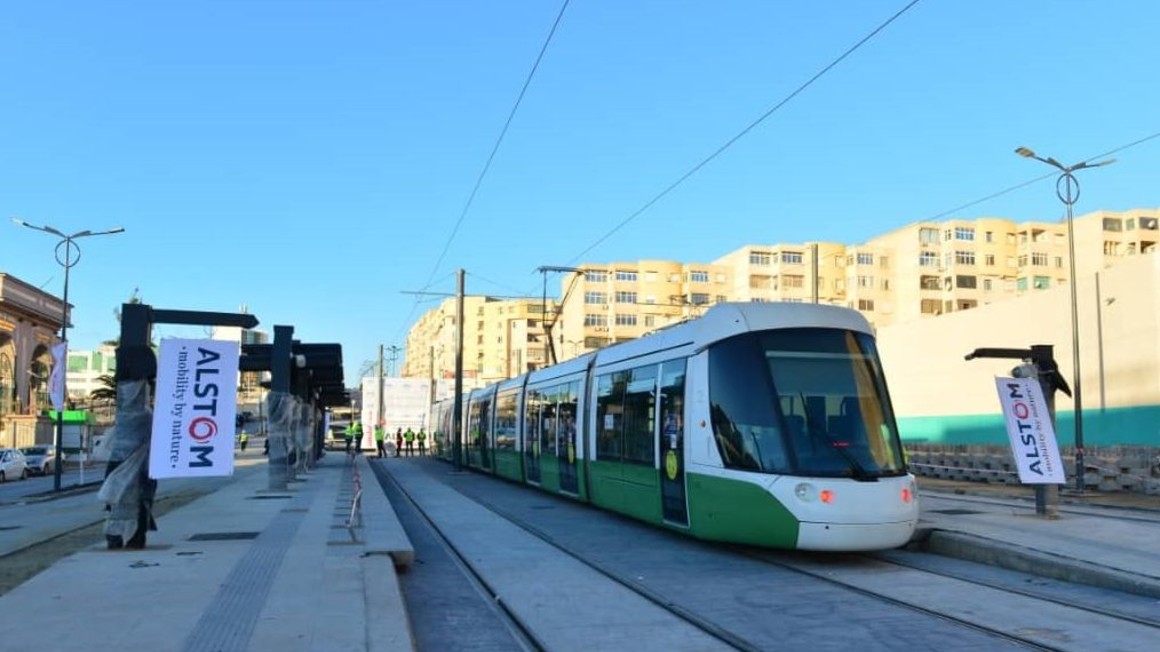 The extension of the Constantine tram leads to the new district of Ali Mendjli, in the southern suburbs of the city (here, the Abdelhamid Mehri terminus).
Download as PDF

19 April 2021 — Alstom Algeria launches the final phase of dynamic testing and system integration on the extension stretch of the Constantine tramway. For the occasion, Mr Kamal Nasri, Minister of Transport and Public Works, Mr Saci, Wali of Constantine, and local authorities from the Constantine wilaya, visited the entire 10-kilometre stretch of the new tramway line extension, from the Slimane Zouaghi stop to the Université Abdelhamid Mechri terminal.

The visit celebrates the achievement of nominal performances for the whole length of the second 3.6 km stretch. Upon completing this step, the system will be ready for commercial service. Trains will connect the Kadri Brahim stop to the Université Constantine II Abdelhamid Mechri terminal. The stretch includes six passenger stops, equipped with six sales windows and two sales offices, in addition to three electric substations, two tramway hoppers, and the Ali Mendjeli viaduct.

In July 2015, Entreprise du Métro d’Alger (EMA) had assigned the turnkey extension of the Constantine tramway line by 10.3 kilometres in total to the consortium formed by Alstom (its leader) and Cosider Travaux Publics.

The first phase of the extension, measuring 6.9 km, has been operational since May 2019. It connects the Zouaghi station to the edge of the new town of Ali Mendjeli.

“We are proud of the work our teams have accomplished, which has led to the project’s final phase. We are committed to meeting the needs of our clients and to continuing our partnership with EMA. Our approach reflects our unwavering determination to bring clean, sustainable mobility to Algeria,” said Amar CHOUAKI, Managing Director of Alstom Algeria.

As part of this project and consortium leader, Alstom is responsible for telecommunications, signalling, traction energy, ticketing, and railway systems, including the catenary system.

Present in Algeria for over thirty years, where it employs 250 people, Alstom has always supported the development of local infrastructures and the railway sector, particularly the tramway market (several tramways are already operating in Algiers, Oran, Constantine, Ouargla, Sétif, and Sidi Belabes). Additionally, Alstom has always considered that developing its industrial and engineering activities in the country was a strategic priority, including the transfer of technology and developing local skills. Thanks to its JV Cital, Alstom is responding to the country’s increasing mobility requirements, such as the need for tramway systems, and continues to support the development of Algerian towns.