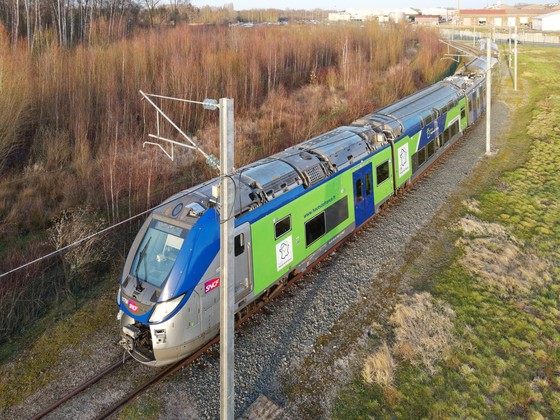 A new step forward for the autonomous train in France

A new step forward for the autonomous train in France 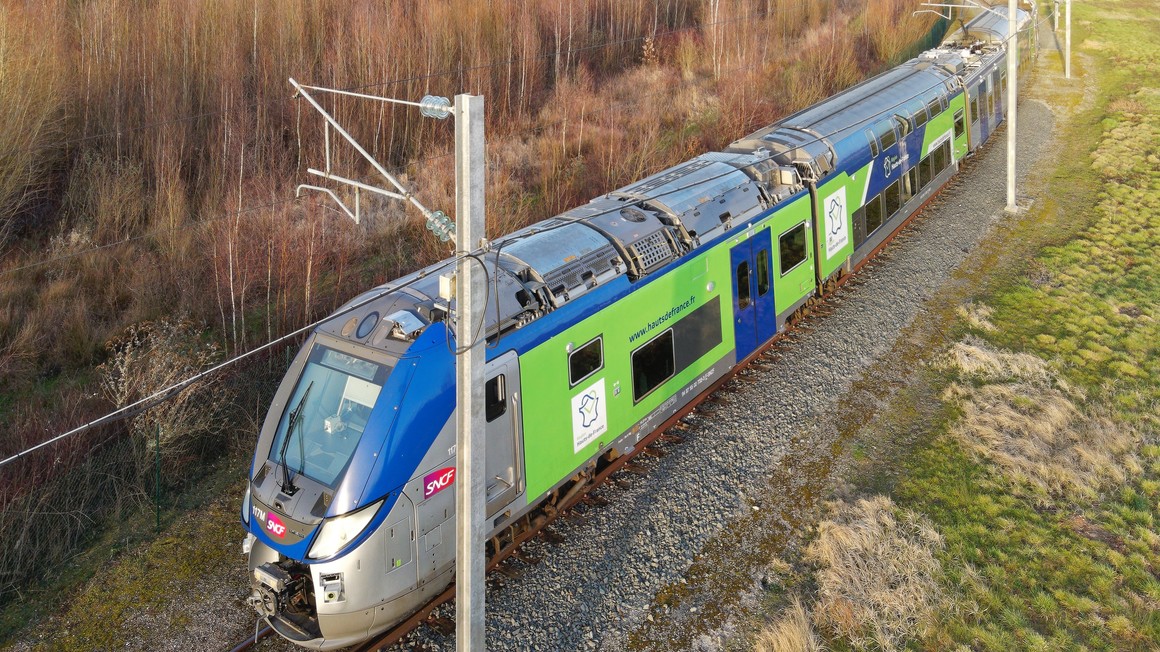 Saint-Denis, 20 May 2021 - Two and a half years after a consortium was launched to develop the prototype of an autonomous regional train in France, SNCF and its partners Alstom, Bosch, Spirops, Thales and the Railenium Technology Research Institute are putting their test train into operation.

At the start of the year, a Regio 2N regional train was modified and equipped for the purpose of the trials by the Alstom site in Crespin (formerly Bombardier). Various sensors, cameras, radars and lidars (laser detection) were fitted to collect essential data for the project.

Initial trials on commercial tracks, followed by a phase of tests at the railway test centre

The first trials took place over one week, in the beginning of March, between Aulnoye and Busigny and between Busigny and Calais (in the North of France). The Regio 2N regional train prototype ran on a commercial track, with the project's engineers and technicians on board.

The trials included tests of:

During this first phase of trials, the sensors and equipment of these new systems specially fitted on the train were activated for the purpose of observing how they work but did not interfere with the movement of the train.

The Regio 2N regional train prototype was driven by an SNCF driver specialised in operating under test conditions.

At the end of this week of trials, tests were conducted at the CEF railway test centre in Petite-Forêt, near Valenciennes, to test the train's autonomous operation system, which makes it possible to automate the acceleration and braking of the train.

From 17 to 21 May, following the tests carried out at the CEF railway test centre, a second series of trials has been scheduled to fine-tune the operating system of the train prototype.

These new trials are taking place on the national railway network at Busigny (in the North of France) and will lead, in the coming months, to semi-autonomous operation in the trial phase.

Semi-autonomous operation makes it possible to automate the acceleration and braking of the train, supervised by a driver.

These trials are a key step towards achieving the consortium's ultimate objective: achieving full autonomy by 2023.

The trials, authorised by the French National Railway Safety Authority (EPSF), will help to substantiate the safety demonstration required for the train's future authorisation to operate.

As an observer in the project, EPSF will be in a position to assess the understanding of the technologies developed and their impact on the railway system, as well as any possible regulatory changes needing to be made for this new type of operation.

Cybersecurity issues, which are crucial for the autonomous train, have been taken into consideration from the start of the project. The project partners are working closely with ANSSI (Agence Nationale de la Sécurité des Systèmes d'Information), the French national cybersecurity authority.

This Regio 2N regional train will be used over the next two years as a prototype of the autonomous passenger train.

The train will be tested on the track between Aulnoye and Busigny, during the school holidays.

Outside the research and test periods, the Regio 2N regional train, an activity of SNCF Voyageurs, will be in regular commercial service, transporting passengers. During these commercial trips, in conventional driving mode, it will record data that will improve the performance of the signal recognition algorithms by detecting, for example, the colour of the traffic lights and the surrounding environment of the train.

At the same time, laboratory work is being carried out on trial simulators at the sites of all the consortium partners to fine-tune the itineraries of the test train and further develop the automated system.

Autonomy thus provides rail transport with new perspectives: more flexible organisation, with the possibility of rapidly changing the number of trains in line with changing needs. These benefits will encourage a modal shift from road to rail, thereby contributing to a more environmental-friendly mode of transport.

"Our project has just passed a significant milestone with great success. Another step has been taken towards achieving autonomy in rail. The mobilisation of the SNCF teams and of our partners allows us to explore all the issues, both human and technological. With our research work and trials, we are making progress in the rail sector and preparing for its future development." Pierre Izard, Director of Technology, Innovation and Group Projects, SNCF Group

"The trials conducted over the last few months represent a significant step towards our goal, that of inventing the transport of the future with the autonomous train. By providing its expertise in the domains of artificial intelligence, BIM (digital mock-up), digital modelling and operating safety, Railenium, the Technological Research Institute for the rail industry, is delighted with the work of the multi-partner teams, who are taking up the technological and scientific challenges of this pioneering project!" Eric Tregoat, CEO of Railenium

"Alstom is particularly proud to have helped reach a new milestone for autonomous operation in France, following the first run of a semi-autonomous freight train on the French national railway network last October. With more than 50 years of experience, Alstom has been offered, with this project of autonomous train for passengers, a new major opportunity to enhance its skills and innovations in the field of rail automations and autonomous transport, thereby developing its leadership in new forms of autonomous and digital mobilities."  Jean-Baptiste Eyméoud, President, Alstom France

"We are pleased to see the realisation of this innovative programme after two and a half years of work by the consortium. The success of these trials confirms the pertinence of autonomous vehicle technologies when applied to the railway sector. The Bosch group, through its Bosch Engineering team in France, is proud to contribute to this research programme which is paving the way for the future of rail mobility." Heiko Carrie, President of Robert Bosch France

"It is an honour for SpirOps to put its AI expertise at the service of this collaborative adventure. This project is a fantastic laboratory for improving experience on board and developing the autonomy of future trains." Jérôme Hoibian, CTO of SpirOps

"As a major actor in rail signalling and a global pioneer in automatic metro systems, Thales has been a partner of SNCF's Autonomous Train programme since day one, with the TeleConduite Rail and Service Voyageurs projects. We are delighted to have reached this new milestone and are extremely proud of the collaboration and trust that Thales and SNCF have enjoyed for many years. This project builds on Thales' latest innovations in the field of artificial intelligence on board platforms such as trains, where safety is critical, and illustrates its expertise in key digital technologies such as AI or cybersecurity." Millar Crawford, Executive Vice-President, Ground Transport Systems at Thales